May 13, 2020, 09:18 AM by Jason Sheets
For 25 years, Chris has been in the moving business. Chris started at 19 as a helper and local driver. After a couple of years, the manager told Chris that he’d make a good Owner/Operator. From that point on, Chris never looked back.

During my short visit with Chris, these qualities became so apparent it was as if they were written on his shirt or plastered on the side of his truck. But they weren’t. That’s not his style.

As a former bedbugger myself, I can’t help but observe another driver’s setup as I approach a jobsite. If you’ve ever been in the business, you understand. I immediately noticed that he spent a lot of time on the road. Most who drive W-900s with Studio Sleepers don’t spend many nights at home. As I got closer, I realized that he was pure Household Goods – because the W-900 had been modified to a single-axle setup, making it easier to pull his pup trailers. He had all the comforts of a Studio Sleeper with all the neighborhood access of a straight truck.

Chris was inside the residence when I arrived, finishing up the prep, inventory, and other paperwork that is required of every HHG shipment. I’ve had more than one customer complain that their hand hurt more after signing the move paperwork than it did after they’d signed their life away during the mortgage closing process. Chris’ professionalism was immediately apparent. Walkboards and plywood were placed using pads to protect stairs, sidewalks, and other surfaces. Items were padded in the residence to prevent damage. His crew was working to make sure items on the sidewalk were loaded first so the public was not inconvenienced. I noticed these things before I noticed the “AMSA Super Van Operator” decal on the side of his tractor. So, when I recognized the award while taking some pictures, I wasn’t surprised.

For 25 years, Chris has been in the moving business. Chris started at 19 as a helper and local driver. After a couple of years, the manager told Chris that he’d make a good Owner/Operator. From that point on, Chris never looked back. 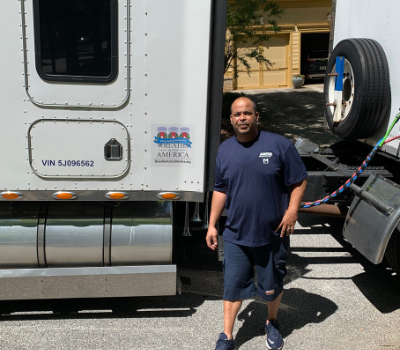 “It’s an honest living,” was Chris’ response when asked what he liked most about the household goods life. Anyone who has ever lived on the road knows what that means. It’s hard. It’s often thankless, usually misunderstood. But it pays pretty well, so long as you don’t figure the hours worked into the amount you actually take home every month. Most of those who do it, do so because of the lifestyle and the sense of freedom. Life on the road also presents humanitarian opportunities if you pay attention. Chris McDonald pays attention.

For the past five years, Chris has been a volunteer driver for Wreaths Across America (WAA). WAA started in 1992 by placing a few leftover wreaths on older gravesites at Arlington National Cemetery. WAA now places nearly 1,000,000 wreaths at over 1,500 locations all across the country. This is made possible by trucking company and Owner/Operator volunteers like Chris. Chris uses his own equipment, pays for his own fuel and expenses and gives his own time to pick up over 1,000 boxes of wreaths in far northeastern Maine and deliver them to cemeteries all over his home state of Florida every December.

“Once you get a taste, feel the appreciation – you just can’t stop. It’s contagious” 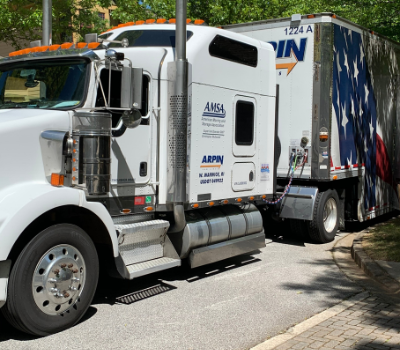 One taste wasn’t enough, and Chris soon learned of another opportunity to give. Operation Shoebox is a Florida-based organization that delivers care packages and Christmas stockings to deployed troops. The group connected with a dentist in Virginia who had a buyback program where he bought Halloween candy from kids. All of the candy was being offered to Operation Shoebox, but the costs of shipping such huge quantities of candy were problematic. Chris was told of the situation and immediately solved the problem. Every year, Chris picks up the candy from the dentist and delivers it to Operation Shoebox, who then distributes it to US Service Members all over the world. Contagious indeed.

The American Moving and Storage Operation’s “Super Van Operator Award” recognizes the best-of-the-best every year in the Moving and Storage industry. Chris embodies all of the characteristics they seek, including professionalism, customer service, and certainly community involvement. Chris won the award in 2007 – eight years before his first trip with Wreaths Across America and continues to exhibit those characteristics today.

The National Association of Independent Truckers is proud to have Chris in its ranks. If you see him out on the road, make sure you say hello, and talk to him a while. You’ll be glad you did.