"Glory Days"  Part One - The Movies

May 18, 2020, 15:22 PM by Jason Sheets, NAIT
This edition of “Cabover Chronicles” is part one of a two-part series discussing the most prominent forms of media that addressed the trucking lifestyle, movies, and music.

Glory Days – In the wink of a young girl’s eye

I believe most people in our industry would agree that the Glory Days of Trucking were in the 1970s. The mystique of trucker life combined with the “outlaw” reputation and utter independence of the open road made trucking sexy.

Either way, the popularity was unmistakable. No matter what side of the divide you were on, trucking was part of your existence; part of the American culture.

The negative view of trucking was bookended by two movies, starting in 1971 with Duel and ending in 1986 with Maximum Overdrive. Both were directorial debuts for some pretty famous people – Stephen Spielberg and Stephen King. Spielberg’s effort was hailed as one of the most intense movies of all time, while King’s debut was basically laughable – being nominated for two Golden Raspberry Awards for Worst Director (King) and Worst Actor, Emilio Estevez.

While the movies resided on opposite ends of the critical acclaim scale, they mirrored one another’s theme of trucks as villains.

The premise of Duel is pretty basic. A businessman is trying to get to a meeting, and in his haste, upsets a truck driver on the highway – or more specifically – upsets a truck. The driver of the truck is never seen – never heard from – never mentioned. The real villain of the movie is the truck itself. The truck terrorizes the businessman for the entire movie – chasing him, stalking him, continually trying to kill him. 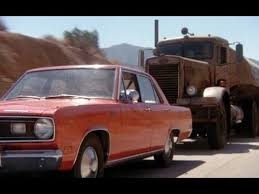 In Maximum Overdrive, mechanical objects of all sorts come to life after Earth passes through the tail of a comet. People are killed by everything from hairdryers to vending machines. But the real stars of the film are the trucks – specifically the ones that trap the cast inside a Wilmington, NC truck stop. Stephen King would later admit that he was basically high on cocaine during production and had no idea what he was doing. That explains a lot.

Maximum Overdrive is one of the worst movies of all time. Ironically, it also produced one of my favorite albums of all time, Who Made Who by AC/DC. Although as I write this, I realize that there is only one song on the album that is original to the soundtrack that isn’t an instrumental, I digress. 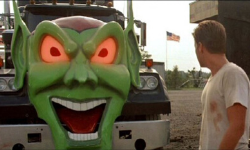 Both movies demonized trucks. Despite the films’ varying levels of success, many average motorists subconsciously carried these fears with them onto the road. The driver was removed from the story and the truck became the bad guy.

The idea of casting trucks as the good guys didn’t emerge until 2007 when Optimus Prime made his triumphant return in Transformers. But we had several opportunities to pull for truckers in the 70s, thanks to two of the greatest trucking movies of all time.

Convoy was released in 1978 at the height of the trucking film craze. No images of evil trucks and terrified motorists here. Instead, truckers are the underdogs – despite their gruff appearance and the trucks they drive. They are doing all they can to preserve their lifestyle and protect their livelihood from the authorities who are doing all they can to keep the truckers at bay – and profit from their hard work.

Trucker slang and trucking life make up almost every scene of this movie. You feel like you’re in the cab from the opening scene when you first hear the voice of the “Rubber Duck” (Kris Kristofferson) over the CB and see images of his truck rolling across the Arizona desert, flirting with Ali McGraw, who is, of course, wearing a short dress and driving a convertible.

Convoy was a huge success and certainly spawned the careers of many truckers who found themselves on the road in the mid-1980s. But it probably would not have been as successful, were it not for 1977 release of another famous movie about trucking… 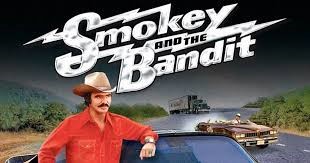 Smokey and the Bandit has been a staple in the trucking culture since its debut. I’m pretty sure 15 states include questions about this movie on the written part of the CDL Exam.

I don’t believe I have ever passed on an opportunity to watch this film. Whenever I’m flipping through channels, I always stop on Smokey and the Bandit no matter how early or late it is in the movie. That’s probably because I have the whole thing memorized, so no matter where I start, I feel like I’ve been watching from the beginning.

Both movies contributed to the hero status of the trucker; hard-working, fun-loving, risk-taking underdogs. A big difference from the evil trucks of Duel and Maximum Overdrive. Both sets of movies drew large audiences; however, the lasting power of Convoy and Smokey and the Bandit are far greater, particularly among those of us who have spent their lives in and around trucks.

People love to talk about how divided our country is, and while that is true, it’s not a new phenomenon. It’s always been that way. Trucks, war, politics, correct placement of toilet paper on the holder – all have spawned some great debates and some great movies.